IN MEMORIAM TO ADRIANO OLIVETTI

Any used tape from an Olivetti machine may he used as a score for this piece.

PERFORMANCE INSTRUCTIONS
Numbers (including zero) represent specific sounds or actions, each of which is assigned to seperate performer. When performed by fewer than 10 performers, the unassigned excessive numbers represents silence. Same number can also be assigned to more than one performer if the tape contains more than one of the same number per row. In such cases the second or third performer performs only when 2nd. or 3rd. of the same number appear on the row.
Each horisontal row is performed simultaneously at preferably fast tempo such as 2 regular beats per second. A conducter or metronome may direct the group if necessary. Blank row represents silence on one beat.

VERSION 1 (poem)
Each performer pronounces his assigned number in any language.

VERSION 3 (ballet)
Each performer use different kind of hat. Perform as in VERSION 2 (zero). 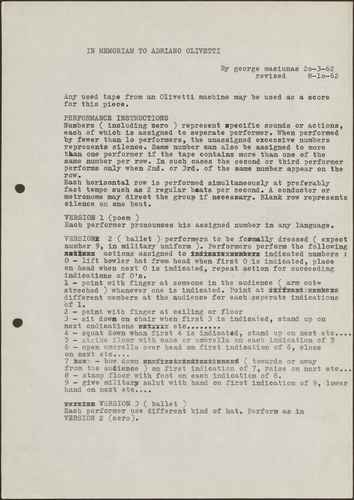 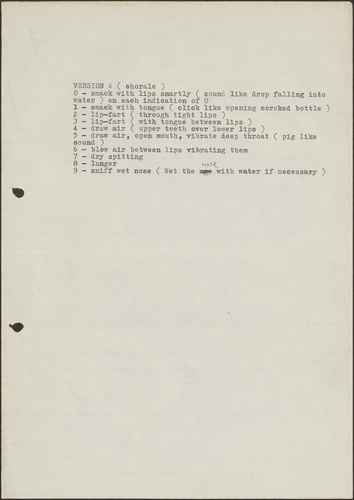