nice to meet you again

Now I am working with some people in Copenhagen and we have just made a happening for 6 days in the aisle of nikolaj church, (Knud Pedersen is still going strong) I like to work in a team though many intentions are spoled. We stared on a very loos basis, and during the day it turned into something, my last was in the trunks and with blue paint running from the ten meter high arch and the scaffolding, it was not my idea and it was not a happening with direction, but it was there. Knud Petersen has got his best idea for years: he asked a brewery if they want to get pictures on the back of there bear-cars and they said: what a wonderful idea, and many guys /3/4/ among those, Addi, Eric and I, was making and making in 8 days and got bears (we have a brewery-strike here, but our brewery is owed by the workers, so it is the only one who has no strike because of good wages)

send me two editions by Filliou, in may may may is coming. I have written for one Paper Snake and one Postface from Thomas a month ago, but I have not seen a page until now2, send me all this and a bill.

Paik comes to Scandinavien soon, in sept., we have got a theater a small one in the center of the town (about 100 seats) and I think there will be two days with the Robot Opera or something else.

I am afraid that many misunderstood my intention in the ball show in Aachen. I can see that you was thinking that I wanted to make a big piece with many people in different dancing situations. No, what I wanted was to stay there in Aachen in Germany trying to make nothing (which has a quality) out of something, for this I need to describe a very idiotic situation. The situation was not for homosexuals (yours prohibition) and not for people with noble intentions, it should not be a piece in beautifulness, at that moment I was not for beautiful things, it had no meaning in situation. I do hope it is enough about that thing - I want to go on - ball-bearig - next point -

I have changed my environment to the middle of Copenhagen.
Our new address is MØNTERGADE 8, COPENHAGEN K

we have very small rooms but I think it is a very good place for work, I already feel better - a town is a town - and pulse.

Business: I have made possibilities for getting tape very cheap and it means that I can realize the plan to make and distribute tape-compositions. Here I have a man with recorders and he is very interested in the new way of life and art or life-art or life as art or art as life
or something else, and he will helpo with everything. If you know about any compositionw which can be realized in this way, then inform me or give me the addresses.

how does it goes with the US Vietnam-politic and san domingo, do every newspapers are for the johnson-politic? I do hopoe that people in common sence can see how stupid this fight is and that the social moving must go to the left if they want better possibilities and positive peace in the world.
I was reading in a south-american magazine: SHOW that Castro was a new Hitler, if they (the politicians) can turn it in that direction, everything is lost, and I do hope your people are a good deal more clever and that most of them can cut through such nonsense.

what can we do? there are too many indolent people in this question, can we do like paik, scream: Awake! C'est deja midi maybe it is the only possibility or like Vostell: you can't stop the human brain, the brain can't stop the brain. It is not exactly the word but something like that.
I believe that it is possible to fight with your brain against other brains, and to win the war. But it is a hard work.

I do hope that 'the tard' had a good audience, and that you are working on your next idea - thought - - to get hold of the truth. 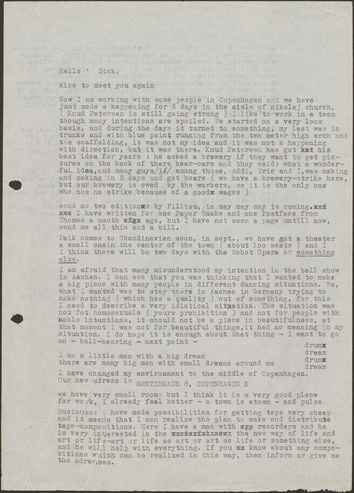 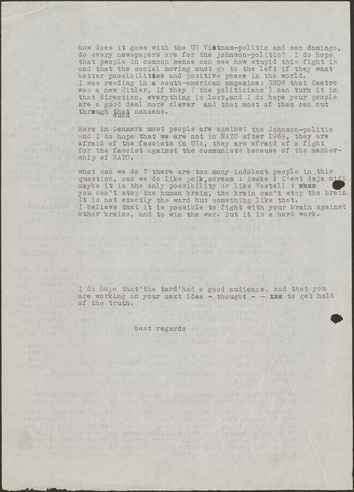