Etude I for Dick Higgins
get the most common story
form a N.Y. – newspaper
and send it to Henning Christiansen

Union Won’t Finance Boatel on East River
By Oliver PILAT
Local 1 of the Amalgamated Lithographers of America has no intention of helping to finance a proposed $4,500,00 boatel on the East River near the Battery.
This was discolosed today as Investigations Commissioner Fischel began a quiet study of arrangements under which private interests would build the boatel – a motel for boaeters – on city property, then lease it back for up to 50 years.

Pair Out of Town
Fischel, whose investigation was authorized yesterday, discovered almost at once that the two owners of Battery marina Boatel Inc. – Col. Robert Doherty of Roslyn, L.I., and Jack Schleifer of Great Neck, L.I., - are out of town and will not be available soon for questioning.
As counsel for Doherty, Brooklyn Assemblyman Steingut wrote on Aug. 21, 1961, to then Mrine and Aviation Commissioner O’Connor that the Amalgamated Lithographers, a union of 9,000 members with $40,000,000 in its pension plan, was “interested in our boatel development.”
Leo Brown, who succeeded O’Connor as commissioner in 1962, assumed that this advice was still reliable, since nothing further had come from Steingut or the principals in the corporation.
However, Edward Swayduck, president of Local 1, said today: “When I talked to Steingut several years ago, I said we would consider buying the mortgage on the lease after the boatel was up and completed and functioning.

‘Hare-Brained Thing’
“My understanding was that the corporation would own the boatel. If title remains with the city, as I hear now, it would not comply withour regulations. We couldn’t invest in a hare-brained thing like that.”
Reports that the New York City Employees Retirement System, which also has millions to invest, was considering buying the boatel lease were denied yesterday by Controller Beame, sole custodian of the system’s funds.

Board of Estimate approval of arrangements for the building and leasing of the boatel dates to 1963. 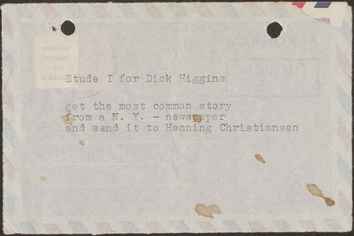 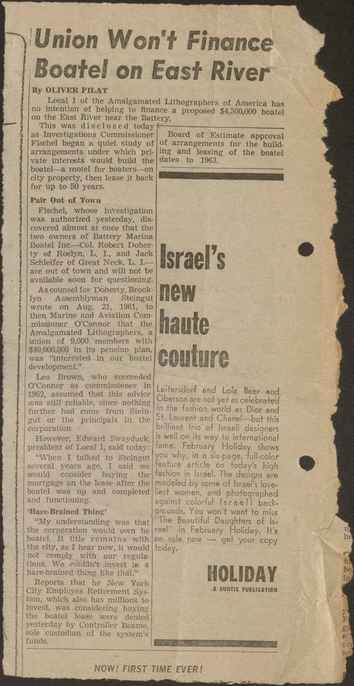